5 things to know before the stock market opens Tuesday 1. Stocks to open lower, after S&P 500 record, with Nasdaq on track for biggest loss

U.S. stock futures were under pressure Tuesday, a day after the S&P 500 hit an all-time high. Nasdaq futures were indicating the biggest decline at the open following Alphabet's lower-than-expected third-quarter earnings late Monday. The Google-parent blamed record quarterly expenses as it invests in areas like cloud computing. In addition to earnings, the Federal Reserve's commentary around its expected third 2019 interest rate cut at the end of its two-day meeting Wednesday will be watched closely. The CNBC Fed Survey finds elevated concerns over recession and worries about the economic policies of both President Donald Trump and Democratic contenders for the presidency. 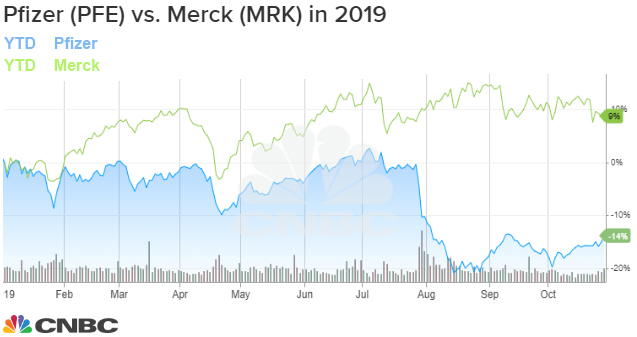 Dow stocks Pfizer and Merck were moving higher as both American drug giants reported better-than-expected quarterly earnings and revenues. Pfizer raised its earnings forecast for the year following higher sales of breast cancer drug Ibrance. At Merck, sales of its blockbuster immunotherapy, Keytruda, crossed the $3 billion mark for the first time in a single quarter. Merck also upped its full-year earnings forecast. Both stocks have lagged the S&P 500's 21% 2019 advance. Merck, as of Monday's close, was up nearly 7.5% for the year. Pfizer was down almost 14.6% in 2019.

3. Boeing CEO gets ready for the first of two days of hearings on Capitol Hill

Boeing CEO Dennis Muilenburg plans to tell lawmakers Tuesday that the aircraft manufacturer made mistakes with its 737 Max, its best-selling plane that's grounded worldwide after two fatal crashes that killed 346 people. Tuesday morning's Senate panel hearing, Muilenburg's first since the crashes in March and October 2018, takes place one-year after Lion Air Flight 610 went down shortly after takeoff from Jakarta. Muilenburg is also scheduled to testify Wednesday at a House committee hearing. Boeing has developed software fixes for a flight-control system on board the planes that pilots said they didn't know existed until after the first crash. Regulators haven't yet signed off on those changes yet.

The U.S. is thinking about extending certain tariff exclusions on $34 billion of imports from China as the two nations work toward a trade agreement. Nearly 1,000 products were exempted from the July 2018 tariff. Those exemptions are set to expire on Dec. 28. The Office of the U.S. Trade Representative said last week that China and the U.S. are close to finalizing a phase one deal. Trump has said the agreement will address intellectual property and financial services and include a pledge for China to buy $40 billion to $50 billion in American agricultural products.

5. Beyond Meat shares, up over 300% since May IPO, to drop despite first profit

Ethan Brown, founder and chief executive officer of Beyond Meat Inc., speaks during an interview at the Nasdaq MarketSite during the company's initial public offering (IPO) in New York, May 2, 2019.
Michael Nagle | Bloomberg | Getty Images

The redhot shares of Beyond Meat were dropping about 20% in premarket trading, despite the plant-based burger maker reporting late Monday its first quarterly profit. Revenue in the third-quarter also topped estimates. However, the stock came under pressure after the company said it would need to offer more discounts to deal with growing competition. The IPO also lockup expires Tuesday, allowing insiders to cash out even more shares. As of Monday's close, the stock was up over 320% from its $25 offering price in May.

Read More About 5 things to know before the stock market opens Tuesday at www.cnbc.com

← Chris Pratt Had to Earn Arnold Schwarzenegger's Approval At the Gym, Of Course