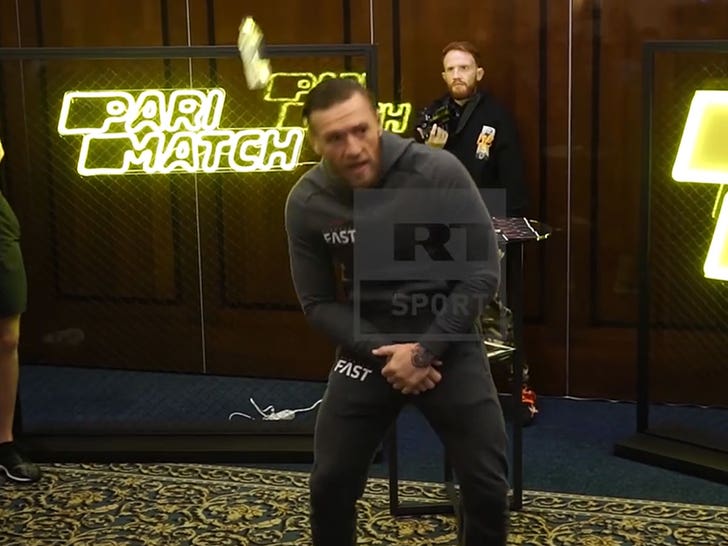 Conor McGregor was attacked by a pissed off Dagestani man in Russia on Friday who threw a water bottle at the UFC star as retaliation for trashing Dagestan.

You gotta see the video … it's intense.

The man went to a media event in Moscow on Friday specifically to get answers from Conor about why he's been trashing Dagestan lately.

Remember, just Thursday … Conor said he "wouldn't go to Dagestan to take a s**t" in a tirade bashing his UFC rival, Khabib Nurmagomedov, who hails from Dagestan.

Clearly, people in Dagestan — a part of Russia — heard the insult and the man who crashed the media event Friday decided to take matters into his own hands.

He pressed Conor about the statement and demanded answers about why he "hates" Dagestan so much.

Conor tried to justify his hatred saying people in Dagestan have been mean to him (boo hoo) — but the answer wasn't satisfactory to the Dagestani, so he fired off a water bottle.

The man shouted at Conor, "All the people? My father, my brother … you think are all cowards?"

Conor managed to duck out of the way and shouted back, "Shut up you fool." The man was escorted out by security.

It's not the first time someone's thrown water bottles at Conor — remember, he traded shots with Nate Diaz and his crew in Las Vegas before they fought in 2016.