The demonic doll whose likeness first cropped up in 2013's The Conjuring has been haunting us for years, mostly thanks to its prolific spin-off franchise, which released its latest installment in June 2019. But for some folks, like paranormal investigator and Ghost Adventures host Zak Bagans, the nightmare takes on a more literal meaning.

"When it comes to haunted objects, you think of Annabelle right away," the occult enthusiast and supernatural collector explains in this clip from Sunday's new E! True Hollywood Story, which details his own confrontation with the fictional doll's real-life counterpart: a Raggedy Ann-style plaything said to have tormented its owners in the 1970s.

Whether or not that's true, the owners were at least frightened enough to call "demonologists" Ed Warren and Lorraine Warren, whose records provide the foundation for both The Conjuring and Annabelle film series, in addition to dozens of others. The Warrens kept the doll locked away in their museum for decades, but today, it resides with Bagans. 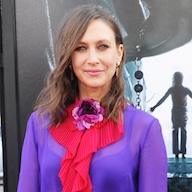 Did the Making of The Conjuring Cause Vera Farmiga, Shanley Caswell and Others to be Haunted In Real Life?

"What do you want, Annabelle?" Zak can be heard asking in the clip, hovering over the doll during what he describes as an "investigation" wherein "a figure appeared out of her and then went into me." The following day, a lightning bolt struck a pole next to his car and "left a huge gash" in its wake.

"Do I believe that dolls can be possessed by a demonic spirit? Yes," he concludes, wondering aloud if the ominous lightning strike had anything to do with his proximity to the Annabelle doll 24 hours earlier.

Check out the clip above and mull it over yourself!

← Why Netflix's 'Dolemite Is My Name' is dedicated to Eddie Murphy's brother, Charlie