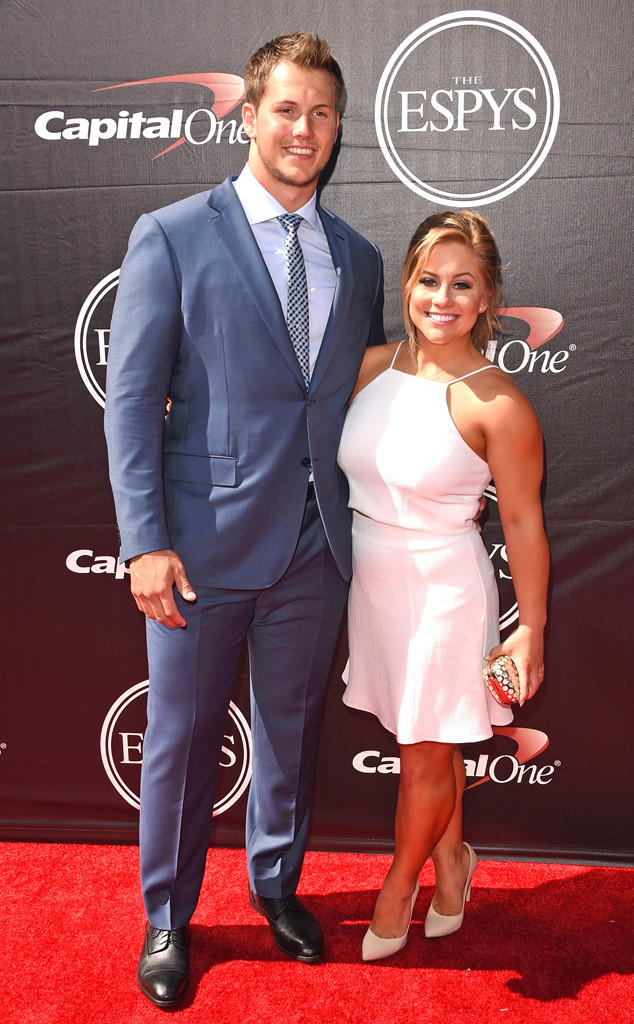 As with most events in Shawn Johnson's life, it can be traced back to the Olympics.

Because that's where the then-20-year-old gymnast was, four years after she nabbed three silvers and a gold at the 2008 games in Beijing, when she received an interesting proposition. Purportedly she was in London to represent USA Gymnastics as the brand's most recognizable face from the games prior and also to cheer on cyclist pal Taylor Phinney. She was hardly expecting to find herself face-to-face with a wannabe matchmaker.

But as she chatted up Phinney's teammate, Guy East, the biker became convinced that the bubbly 4-foot-11 powerhouse was simply perfect for his little brother, a 6-foot-2 football long snapper heading into his sophomore year at Nashville's Vanderbilt University.

"I thought it was insane," Johnson would later tell local paper The Tennessean, but she didn't protest when he pushed Andrew East onto a flight bound for Los Angeles, where she was cha-cha-ing her way to a second place finish on the all-star edition of Dancing With the Stars.

From East's perspective, "I thought that the date went really well," he shared in their shawn johnson + andrew east YouTube series, recounting their origin story for nearly a million subscribers. Johnson, though left somewhat charmed by that initial outing, was less confident. Or, as she put it in the video, "It took Andrew nine months to convince me to go on a second date."

Now the duo are at the end of another, seemingly interminable, nine-month wait. Because seven years after that first medium-successful date, the couple are anticipating the arrival of their first born and having conversations about how they keep their passion aflame some three years deep into marriage.

Officially 39 weeks along, intimacy looks different these days, the 27-year-old recently admitted to Us Weekly. "My husband is, bless him, just getting used to the whole body changing thing," she shared. "My boobs are leaking already, which is such an interesting thing, and he's getting used to that, which grosses him out….It's a learning process."

Thankfully the couple are old pros at navigating the type of awkward situations that trip others up. Because there were several points during that first year together when they could have decided they weren't destined to be teammates.

"We had gone on one date, this was, like, in 2012. But I didn't really consider it a date," Johnson recalled on YouTube of the limbo they remained in from that fall until the following summer. "So in between, like, during the nine months, I went on a date with other guys." And one lucky suitor just happened to play ball with East, 28. "I didn't think I was ever going to see you again," she reasoned of dating one of his friends and teammates. "So to me it was kind of like, I met this guy, he asked me on a date, whatever." 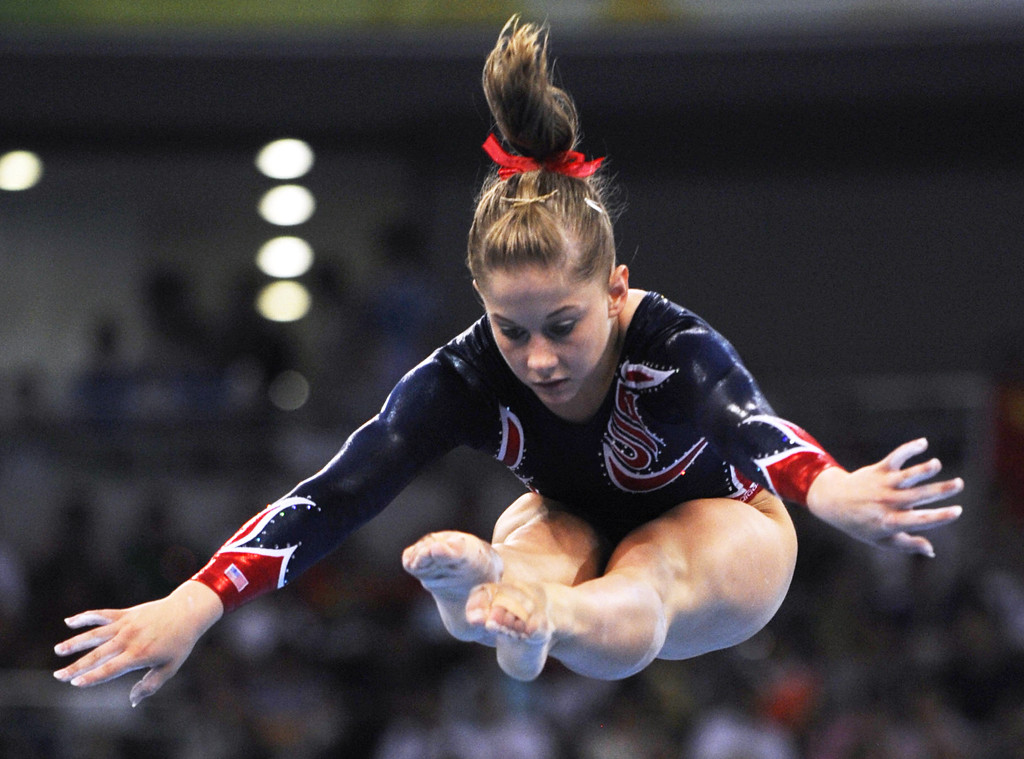 To be clear, the Indianapolis native was also dating around, as a football player on a major college campus is likely to do. But he didn't give up on the person he considered the gold standard of girlfriends.

His third time was a charm, with the athlete responding to his candy bar query, that, actually, 3 Musketeers was her favorite. She just wasn't sure yet if she was sweet on him.

Not all that far removed from a serious relationship with fellow Iowan Ryan Edwards (incidentally, he was also a footballer, playing defensive back for the University of Iowa, so perhaps the athlete has a bit of a type), "I wasn't in a place in my life where I was ready to date serious." 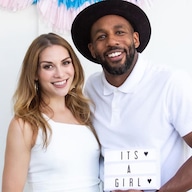 So she ghosted him a little. She'd answer the occasional text, but when it came to making plans for a second face-to-face, she was admittedly a bit flaky. Following a missed connection in Nashville, Johnson turned up in his home state as the grand marshal for the 2013 Indianapolis 500 parade. "I didn't know Andrew was in town," she said, "but he goes to the Indianapolis 500 every year, which has been a tradition of ours every since we started dating….So he's texting me, and he's like, 'My dad saw you in the parade. If you have any free time, do you wanna go to a movie?' And I was like, okay, okay, I can do this, I can do this.' And I was like, 'Yes, I will go to the movies with you tonight.'" 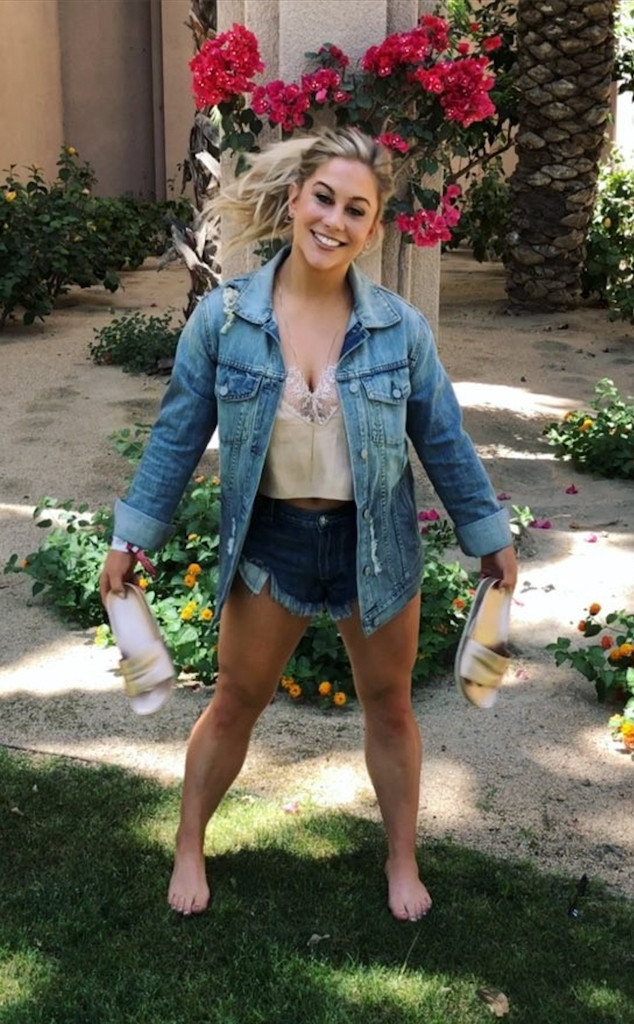 Once again spooked by her own nerves ("I wasn't a smooth dater," she allowed) she texted him to cancel, but redeemed herself the following day when he asked to meet up at the main event. Though her entire day was committed to media sessions, interviews and general schmoozing, she ducked out at one point, explaining she needed to use the restroom and dashed outside.

"I see Andrew, and I was just giddy," she recounted. "I thought you looked adorable." He found her downright radiant. "The first date I saw Shawn smile and I was like, angel, that's the girl," he said. "She smiled again and I was hooked again."

Their future was sealed when she included a photo they'd taken together on her Instagram feed, the millennial version of wearing someone's pin or letter jacket. "When she posted that picture and she's texting me, she said, 'Hey it was really good to see you,' and then I knew it," said East. "I was like, all right, this is it."

The twentysomethings enjoyed their first official date that summer when East invited her to join him at Nashville's CMA Fest. "It was literally the cheesiest, dumbest, not smooth text message ever," she said of his digital missive in which he referenced how football had taught him to persevere when things are tough and so he was going to keep pushing until he got what he wanted.

"It was just absolutely a beautiful piece of poetry," he countered. And whether or not that is true, it worked. Because as a widely lauded Olympic athlete, Johnson had been courted by smooth, she had dated smooth, she was well aware of what smooth and polished and just a little calculated looked like. "You were so rough around the edges that it was comical, but the sincerity, that authenticity, it was so genuine. I just trusted you and I loved it," she explained to East. "And it was because of that I was like, fine, I'll give this guy a shot." 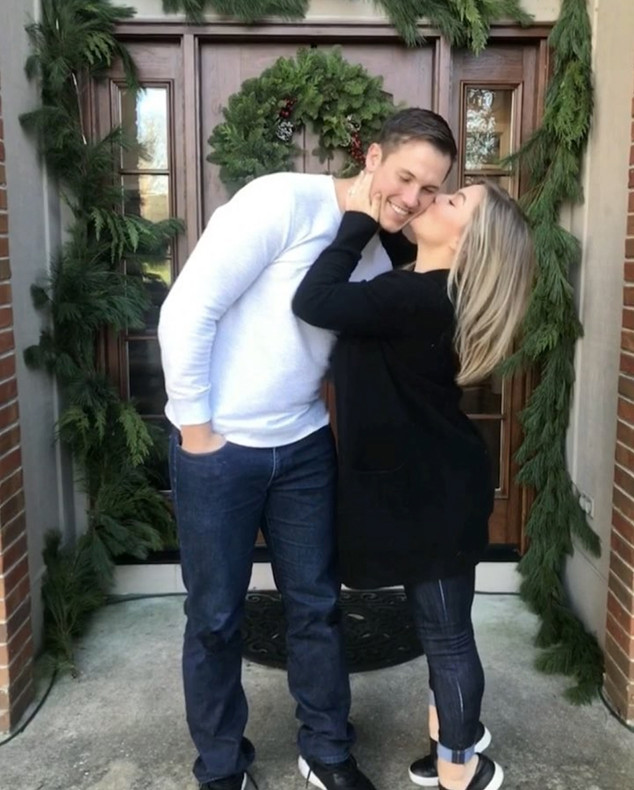 She agreed "on the spot" to book a flight to Nashville. And 24 hours—and one epic make-out session on the 50-yard line of the Vanderbilt stadium—into what would become a four-day date, she found herself opting out of a trip to Chicago to spend more time with the guy she was suddenly convinced she would marry.

Sitting at the airport waiting for a flight back to L.A., she downloaded an entire Josh Garrels album, East having introduced her to the Indiana-bred folk singer as they tooled around his town, and phoned her mom.

"She was like, 'Well, how did it go? Are you in Los Angeles?'" she said. "I was like, 'No, I canceled all my plans. I stayed in Nashville. I'm just leaving Nashville and this guy is perfect. He's literally perfect."

Four months later, she had relocated to Tennessee. And less than two years after that, she was accepting his proposal mere moments after she threw out the first pitch at a July 2015 Chicago Cubs game. By the following April, they were marrying in front of 350 guests at a private Nashville farm, Sara Fried putting together an affair that was equal parts romantic and sentimental.

Garrels provided the soundtrack for their first dance. 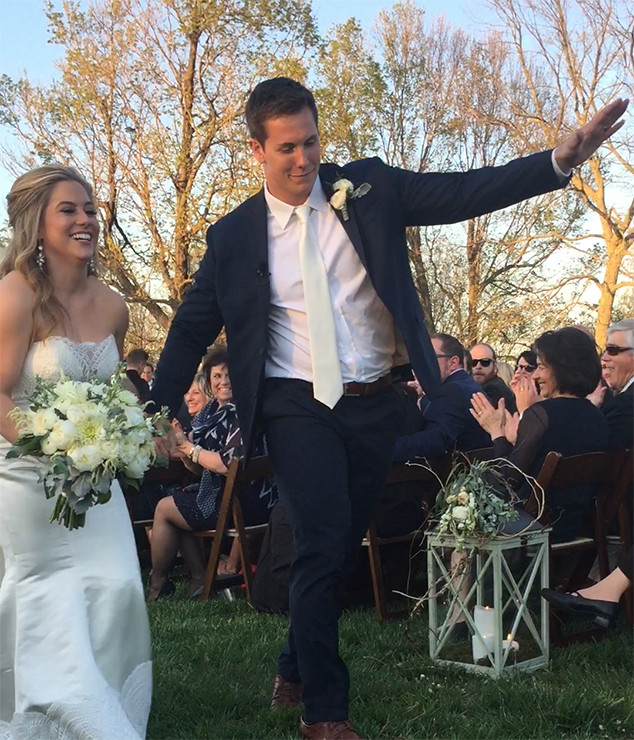 It would be even longer until they could settle into the thick of marriage, putting down roots in a permanent home. The morning after their wedding, the couple hopped a 6 a.m. flight out to Oakland, Calif. where East had just been signed to play with the Raiders. By August he'd been released, only to be picked up by the Los Angeles Rams the following March. That two-month stint was followed by brief stops with the Raiders (again), the Jacksonville Jaguars and, most recently, the Washington Redskins.

Johnson, meanwhile, though officially retired from gymnastics in 2012 due to a torn ACL, remains one of the sport's most public ambassadors. As such she spent much of 2016 on a cross-country tour with Team USA after serving as commentator at the Rio de Janeiro games. All told, save for the four months they spent holed up in an Oakland Hampton Inn, they spent more time apart than together.

"It was a long few months, we went through hard things," she told People as they approached that first anniversary in 2017. "He got cut from the NFL and tried out for another team, we were both going through stressful times in life." 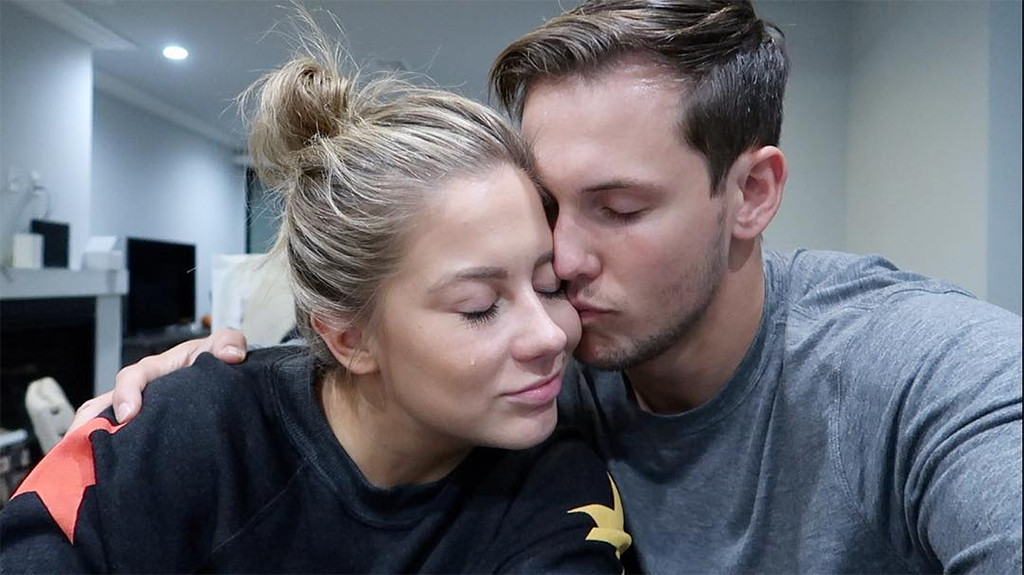 The most testing, by far, came that October when Johnson learned she had miscarried mere hours after discovering she was pregnant. "I kind of felt broken as just a person," she told E! News. In an effort to heal, she found herself spending hours on the Internet, devouring anecdotes from other women who'd endured the same anguish.

"I desperately wanted to hear other people's stories and how they handled it and how they healed and how they mended themselves from that experience," she explained. "And I would just sit in front of the computer for hours, reading comments and stories, and piece by piece, I kind of built this community that helped me get back on my feet." 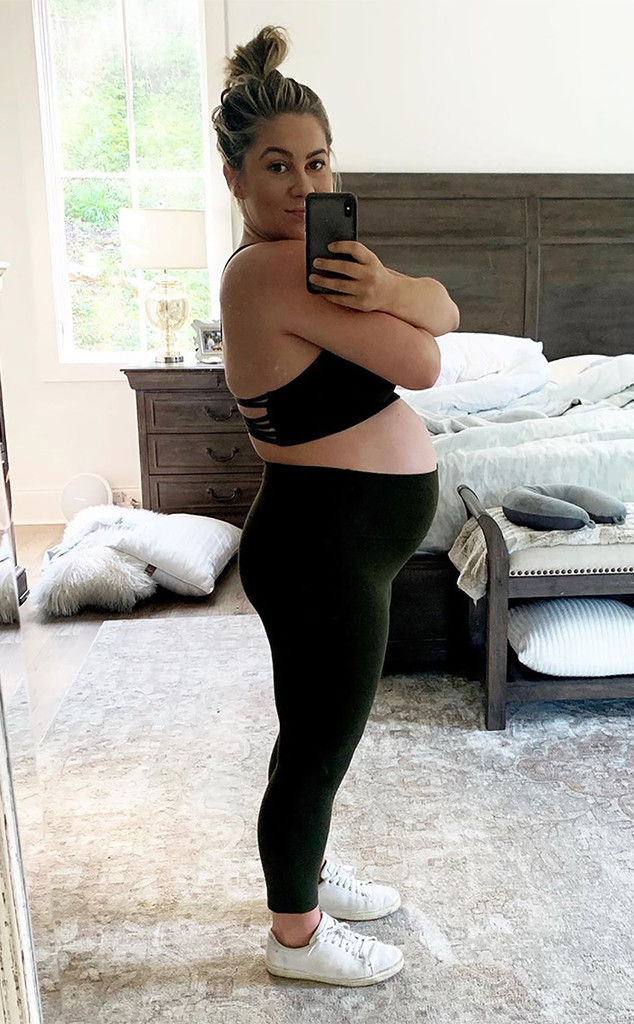 Still, when they learned earlier this year that she was expecting again, they felt equal parts thrilled and terrified. "Both of us, being athletes, we're used to people saying, 'Eat this, do that,' and you can fix it," she said. "With a baby, in a pregnancy, there's really nothing you can do except wait. So for us, it was really scary and we kind of just leaned on each other to pray out way through it."

Now, mere days away from meeting their son or daughter, the excitement is seeping through as Johnson indulges cravings ("Bagel sandwiches—that's about it"), takes a stab at guessing the baby's gender (she's leaning toward boy), locks in their names and begins envisioning what type of mom and dad they might become. "I feel like we'll probably be overbearing parents just because we're so excited and we want so much for our kid—in a good way," the Philips Avent spokesperson told E! News. "Like, we want to show him the world and we want to teach him so many things."

More than anything, she said, "We're just praying to be able to hold our baby some day and raise them for the rest of their life."

Read More About How Shawn Johnson Nabbed a Gold Medal-Worthy Marriage at www.eonline.com