“Ur body is a wonderland. Double date?” the “10,000 Hours” singer, 25, commented on a shirtless photo that Simpson, 22, posted on Instagram on Tuesday, October 8, of himself at a recent swim meet.

In response, the Australia native wrote, “Text me.” 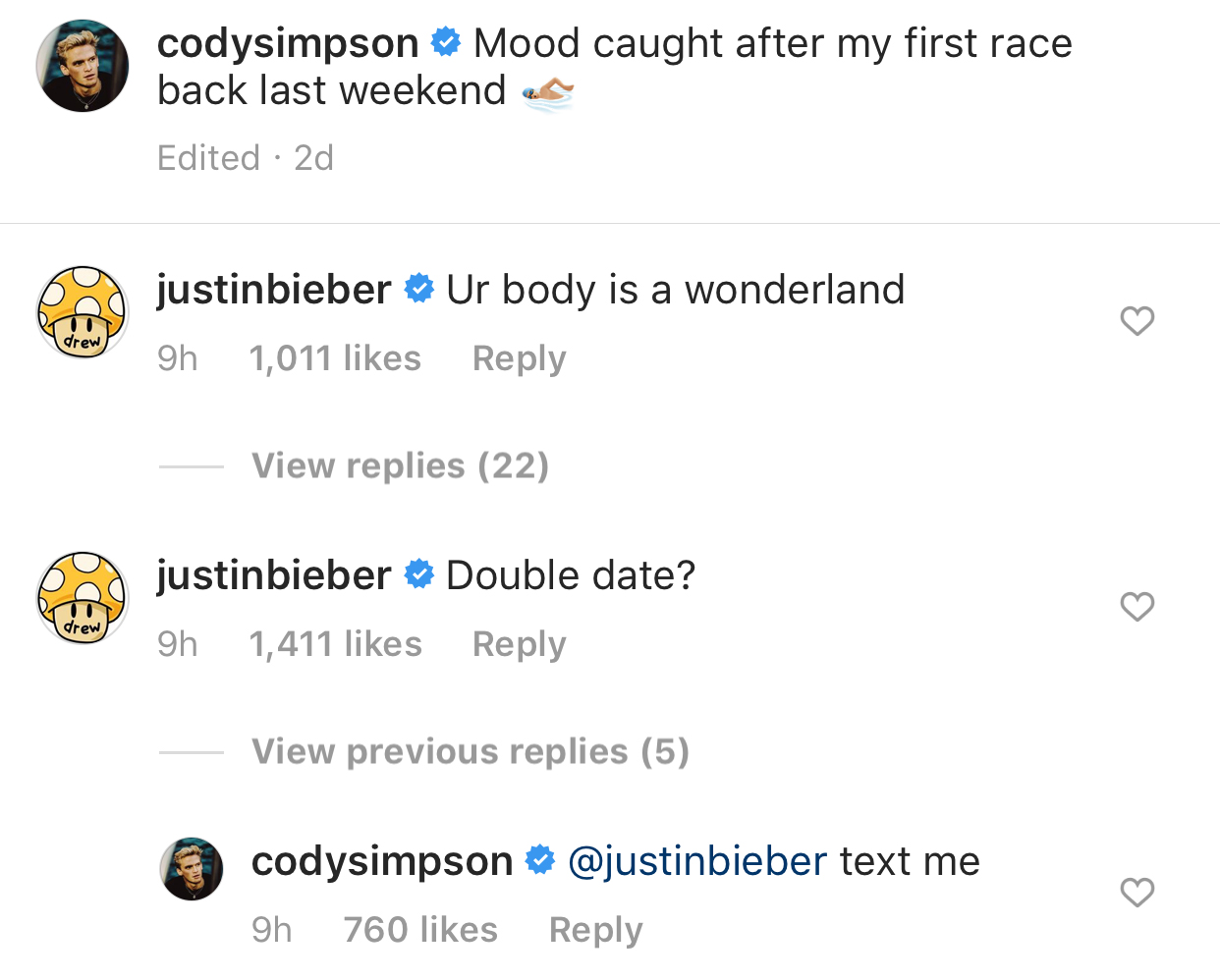 Both couples’ romances have made headlines as of late. The Biebers tied the knot for a second time on September 30, one year after their low-key courthouse wedding in New York City. Justin and Hailey, 22, invited approximately 100 of their family members and close friends, including Jaden Smith and Kendall and Kylie Jenner, to South Carolina for their second, more traditional ceremony.

Cyrus, 26, and Simpson, for their part, started dating in the wake of her back-to-back splits from husband Liam Hemsworth and girlfriend Kaitlynn Carter. The singers were first spotted kissing at the Los Angeles restaurant Backyard Bowls on October 3 while waiting for their açaí bowl orders.

“They walked in holding hands and looked around a bit, but then started to get pretty comfortable and were not shy about showing their affection towards each other at all,” an eyewitness told Us Weekly. “They were both standing at first, flirting and kissing. Then they came and sat down. Miley got up and sat on Cody’s lap and started making out with him. His name was called at the counter, and he grabbed his smoothie bowl, and they left together holding hands.”

The Hannah Montana alum and the poet have since continued to show PDA on social media. Cyrus confirmed their romance on her Instagram Stories on Friday, October 3, by uploading a shirtless photo of Simpson with the caption, “22 ✅ Australian (my type) ✅ Abs ✅ Hot Girl Fall ✅.” Three days later, he shared a poem that he wrote about “making love in the soft jewelled morning.”

More recently, the former YouTube personality visited the “Slide Away” songstress at the hospital as she battled tonsillitis. “BF coming to visit me at the hospy,” she captioned a selfie from her bed on Tuesday.

Cyrus announced her separation from Hemsworth, 29, in August after less than eight months of marriage. The Hunger Games star filed for divorce 11 days later. She then dated Carter, 31, for a month before breaking up in late September.

“Get used to me dating,” the Disney Channel alum tweeted on Friday. “This is where I am at !”