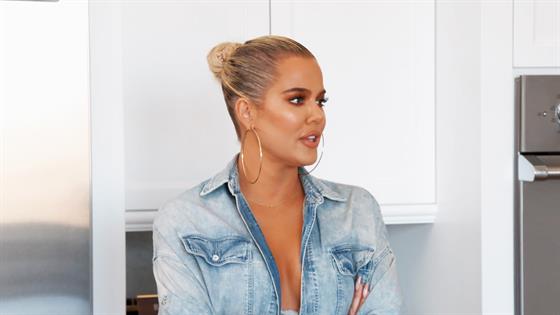 Kris Jenner has some explaining to do.

The momager is notably MIA in this clip from Sunday's new Keeping Up With the Kardashians, and it appears her absence is not without reason. With Khloe Kardashian at a loss as to why her mother has been "literally avoiding" her for days, she turns to Scott Disick for information during a visit to the Flip It Like Disick star's Hidden Hills home.

"It's so weird. I've been looking for mom forever," she tells the three-time dad, who has some relevant intel to share.

"She was here yesterday," he replies, going on to say they spent the afternoon home goods shopping in Westwood. That in itself seems like confirmation Khloe isn't making any of this up, but True Thompson's mom is definitely still wondering "why on earth" Kris would be ignoring her right now.

"She's scared that you're gonna confront her about that SoulCycle thing," Scott explains, referencing the 2015 incident wherein Khloe's ex Lamar Odom showed up to one of her gym classes after allegedly receiving a location tip from the Kar-Jenner matriarch. Conversation surrounding the possible set-up—whose aftermath was captured by KUWTK cameras during season 11—resurfaces this week with the release of Odom's 2019 memoir, Darkness to Light.

She is, however, considerably irked by the silent treatment Kris seems to be sticking her with as of late. So, naturally, she and Scott devise a plan to snap her out of it.

Hear the duo's scheme for a face-to-face chat between Kris and Khloe in the clip above!

Steve Carell May Be the Only Person Not Binging The Office →