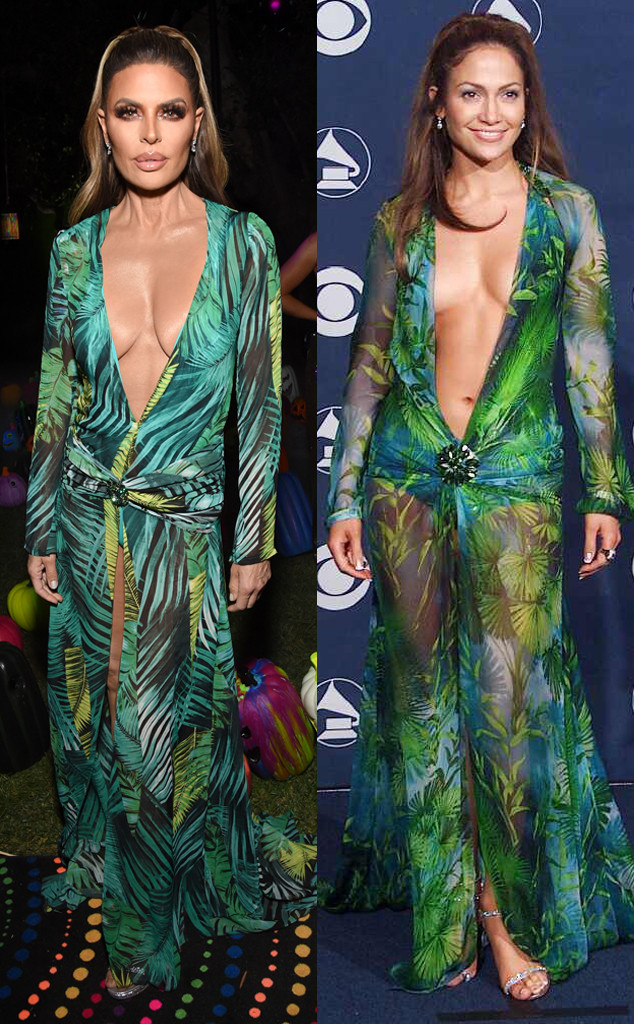 Lisa Rinna was serving face and bawdy at Casamigos' annual Halloween party in Beverly Hills on Friday night. For the star-studded affair, the 56-year-old reality TV personality channeled none other than Jennifer Lopez.

That's right, Rinna slipped into a vibrant green tropical dress that featured long sleeves, a plunging neckline and extremely thigh-high slit. The Bravo star's risqué ensemble was certainly a tribute to J.Lo's iconic Versace design that she wore to the 2000 Grammy Awards.

Making her Halloween costume even more spot-on, the Real Housewives star styled her hair with soft waves in a half-up 'do. She also had that "J.Lo glow" as she donned a bronze contour, smoky eye, nude lipstick and champagne-colored highlight. She completed her lewk with gold strappy heels, dainty earrings and a body luminizer.

"Jenny from the Block," the actress captioned her Instagram Story, alongside a fiery pic of her costume. Another post read, "I love Halloween." 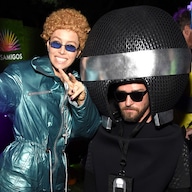 This isn't the first time in recent years Rinna has dressed up as a celebrity icon. Last year, the 56-year-old actress went as her fellow friend and co-star, Erika Jayne.

"I LOVE YOU!! AMAZING!!," the self-dubbed Pretty Mess wrote in response to her gal pal's costume.

Just last month, Jennifer's iconic green dress made a comeback in pop culture after she closed the Versace runway show during Milan Fashion Week. While there, the "Medicine" singer slipped into a re-imagined version that was adorned with lavish beads and more cut-outs.

"So this just happened," the Hustlers actress said on Instagram, after sharing a clip of her strutting her stuff down the catwalk.

Now, we just need to see what J.Lo decides to be for Halloween. Could she return the favor and channel Rinna? One can only hope.