North West is a mood.

The 6-year-old cutie stole the show at her dad Kanye West's Jesus Is King Sunday Service Experience. Ye, who recently dropped his highly anticipated album, took to the stage at the Forum in Inglewood, Calif.

Of course, Kim Kardashian and Kanye's eldest daughter joined her dad and sang along with him. At one point, the Yeezy designer gave the mic to the 6-year-old star, and she soaked up her moment on stage. It's safe to say she was the center of attention during the Sunday afternoon event, and we don't blame her!

For the special celebration, the 42-year-old star also performed a few hits from his latest album and his 2016 album, The Life of Pablo.

"Omg performing Pablo Songs," the KKW Beauty founder tweeted on Sunday afternoon. She previously shared, "Go to my IG stories for the best Sunday Service videos ever!!!!! OMG Kenny G is right next to me," she wrote excitedly. "Praying he goes up on stage!!!!" 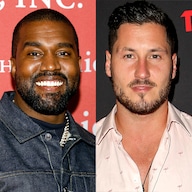 The Sunday Service Experience comes only a few days after Kanye finally released his Jesus Is King album.

He also revealed that he abstained from pre-marital sex during the final stages of production. In addition to his album, Ye released an IMAX documentary titled, Jesus Is King: A Kanye West Experience.

It's unclear if the 42-year-old rapper plans to go on tour, but if he does, we hope North joins him!