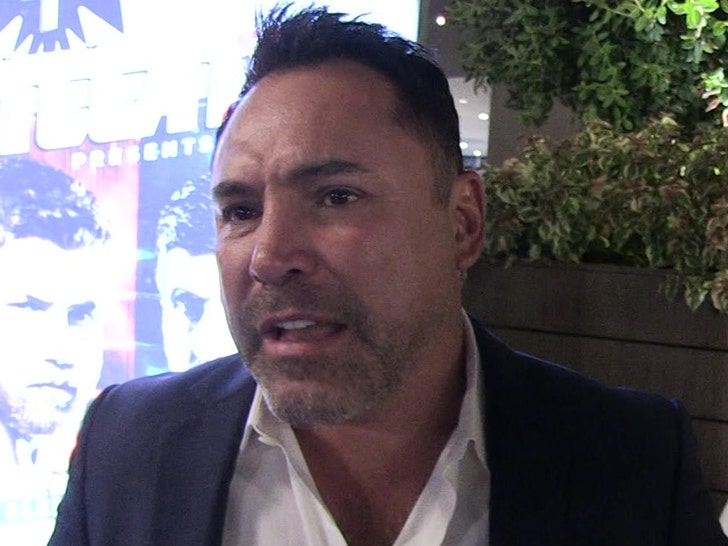 Oscar De La Hoya is being sued by a famous ex-Golden Boy Promotions employee — who claims the boxing star would call him at all hours of the night to save him from situations when he was "highly intoxicated."

The man behind the suit is David Gonzalez — a famous L.A. radio star known as Tattoo.

FYI — Tattoo first appeared on Power 106 back in 2001 and agreed to have the words, "I slept with Shaq" tattooed on his forehead in exchange for Lakers playoff tickets. He later got the tattoo removed.

But, Gonzalez says he was contacted by Golden Boy Promotions in 2010 to work for Oscar's company, mainly doing promotional work and announcing at events.

In his lawsuit, Gonzalez says things got weird quick … and was ordered to "perform a wide range of highly personal, improper, and elicit non-work-related duties."

Gonzalez says Oscar would contact him "at all hours of the night in need of help from various compromising situations and, in most cases, assisting De La Hoya out of life threatening situations while he was highly intoxicated and under the influence of various substances."

Things came to a head in April 2018 when Gonzalez says he was in a bad accident and was hospitalized with serious injuries including a broken rib.

Gonzalez says he called Golden Boy to inform them he couldn't work but was told he needed to show up or he would be fired.

At first, Gonzales says he sucked it up and did his job … but the pain became too much to bear and he needed time off to recover.

As a result, Gonzalez claims Golden Boy essentially forced him to quit.

He's not only suing for damages for the pain and suffering but also claims Oscar failed to pay him for tons of hours of overtime and other unpaid wages.

We reached out to Oscar and Golden Boy for comment. So far, no word back.