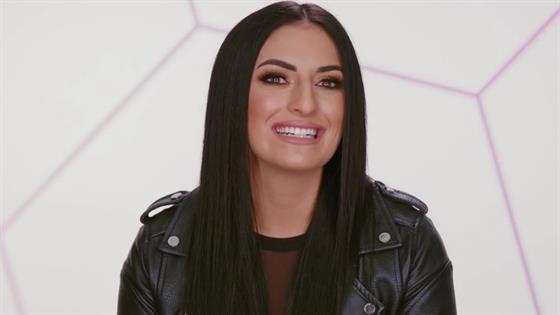 Ronda Rousey entered "full-on antagonist mode" during this week's new Total Divas. And as far as getting into character is concerned, the lauded pro athlete went above and beyond.

"Maybe I did too good of a job," Rowsey told husband Travis Browne of her recent string of performances, "because I feel like every single girl in the WWE needs an individual explanation for every single one of my actions."

With WrestleMania right around the corner, Tuesday's episode saw the Divas doing their best to stand out. But while Nia Jax practiced a wow-worthy wrestling stunt and Carmella recorded a new intro track for her set, Ronda took a markedly different approach to getting noticed.

What began with in-ring smack-talk on Monday Night Raw—where she debuted a newfangled "villain" persona that quickly spawned locker room tension with Nia—graduated to after-hours improvisation this week. And suddenly, differentiating Ronda's in-character comments from her actual opinions became almost impossible, for her audience and co-workers alike.

"I'm not going out there and doing their f–king act anymore. F–k everybody, WWE universe included," snapped the combat sports champion in a viral video originally shared to her personal website, which caught her in the midst of what looked like a moment of downtime. Continuing, Rowsey vowed to "disrespect the sport" her friends hold dear before segueing into a series of insults targeting the wrestling organization at large. "It's scripted. It's made up. It's not real," she scowled.

The digs surprised her colleagues, who had never heard Ronda denounce the company before (in fact, she's spent much of her inaugural Divas season singing its praises) and understandably felt a little betrayed after watching the video. Being that the WWE roster has fielded critiques about legitimacy for years, it's a sensitive topic. "I hope Ronda doesn't really think that," said Nattie Neidhart.

And of course, she didn't.

"I feel like nobody understands what I'm trying to do," Rowsey noted during her conversation Travis. "Everyone just thinks that I'm like, this malicious asshole that is just sh–ting all over everything that they love. And they don't see that I'm doing everything that I can to contribute to it."

In most professions, publicly ragging on your employer isn't typically called "contributing." But the WWE adheres to a unique set of priorities, and blurring the lines between reality and make-believe (especially as a vehicle for self-promotion) has always been chief among them.

With that in mind, Ronda explained, "I'm not trying to talk down on the industry…l'm trying to be that antagonist that pushes a story." She's not the first WWE superstar to do so out-of-office—fellow Divas newbie Sonya Deville threw Twitter shade Ronda's way a few episodes back, with explicit intentions to drive traffic to the brand and hopefully stir up a rivalry in the process—but perhaps the first to do so in this particular way.

"I'm in a little bit of a different situation than the rest of the girls in that, they show up and they play a character. They have their name at home and their name when they're performing," the Olympic medalist pointed out. "But I'm Ronda Rousey all the time. Where does that line stop from me in character to me as myself?"

Hoping to clear that up for her co-workers with some good old-fashioned quality time, she invited the women to her and Travis' ranch with intentions to "make sure that these girls understand me and where I'm coming from."

Catch up on all the action from this week—including Sonya's house-hunting venture and Nia's health revelation—in the full recap video above!

Read More About Ronda Rousey’s “Antagonist” Character Upsets WWE Colleagues: “Nobody Understands What I’m Trying To Do” at www.eonline.com