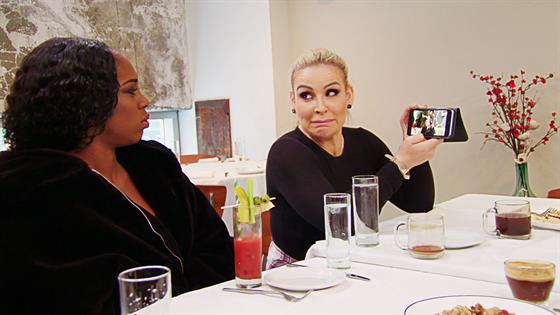 Why is Ronda Rousey so mad?

The professional wrestler and veteran combat sports champion takes a swing at her employer in this clip from Tuesday's new Total Divas, and it hits below the belt. After watching Rowsey's latest social video online, the clip finds fellow WWE superstars Nattie Neidhart, Trinity Fatu and Carmella confused and conceivably a little bit hurt by their coworker's comments.

"I'm not going out there and doing their f–king act anymore. F–k everybody, WWE universe included," Ronda says in the video, speaking about her latest promotional segment for Monday Night RAW.

During the performance (which played out on last week's Total Divas) Rowsey unveiled a newfangled "villain" character whose attitude about making money and going rogue stirred up trouble with Nia Jax almost immediately. In the new post-show tape, she ups the contention.

"I meant I'm going to disrespect the sport that they love so much," she continues, referring to those earlier claims made on RAW before using words like "scripted," "made up" and "not real" to describe WWE's wrestling program.

"None of those bitches can f–king touch me," Ronda wraps up. "The end."

It's easy to understand why the digs catch her colleagues off-guard. Discussing this recent bout of shade over breakfast, the women agree that Rowsey was probably trying to get fans "riled up"—and succeeded in doing so, as Nattie acknowledges—but at what cost?

"I think so highly of Ronda, so for her to say that everything we do is fake…it kind of made me go like, whoa," Neidhart, a good friend of Ronda's outside the wrestling ring, tells the Divas camera. "Like, I hope Ronda doesn't really think that. And I don't want her to think that we're just this phony business."

Did Ronda cross a line? See what you think after checking out the full preview clip above.

← These 9 startups are betting that your gut is healthcare's next frontier, with millions in backing from investors like Marc Benioff and Vinod Khosla