Sam Altman, one of tech's most influential investors, is throwing an invite-only luncheon at his San Francisco home next week to raise funds for Yang, an entrepreneur whose uncommon policy ideas has earned him a fan base — or "Yang Gang" — in tech's heartland.

The invite was first leaked by Recode's Teddy Schleifer on Twitter.

The presidential candidate who shuns ties and wants to provide every American with a "universal basic income" has rallied a group of engineers, product managers, and tech executives behind his campaign. His signature proposal is to give all adults $1,000 a month, a so-called "freedom dividend" paid for by taxing companies that benefit the most from automation and artificial intelligence.

It's an idea that Altman has seeded in his backyard. He led a pilot program that gave free cash to a few dozen people in Oakland, California, for a period of one year. The goal of the experiment was to see how people's lives change when they don't have to worry about money. A longer-term study has been delayed several times. 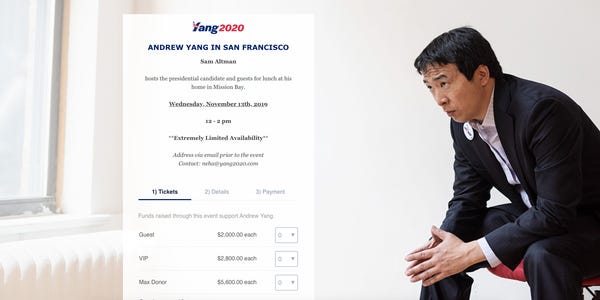 Screenshot of the invitation to an Andrew Yang fundraiser at Sam Altman's house.

Employees at the same companies that Yang wants to tax are putting money behind him. The Center for Responsive Politics, whose website OpenSecrets.org tracks federal campaign spending, lists the companies whose public action committees, employees, or owners have contributed the most to Yang's campaign committee. Google parent-company Alphabet tops the heap, followed by Amazon, Microsoft, the University of California, and Facebook.

On a national level, Yang is polling in the single-digit percentages in several polls. But in Silicon Valley, Yang's fans include some big names. Jack Dorsey, the cofounder and chief executive of both Twitter and Square, has contributed to Yang's campaign; James Monsees, who helped create Juul, and Twitch cofounder and executive Kevin Lin are also donors.

Altman, who stepped down as head of startup accelerator Y Combinator to focus on a new venture earlier this year, called himself a "long-time supporter of Yang" in an email to Business Insider. He's contributed $2,700 to the campaign, according to data from the Federal Election Commission, though Altman believes the information hasn't been updated and said he's given $5,600.

Altman said he's "particularly interested in (Yang's) promotion of UBI and understanding of the coming wave of automation."

Now, Altman is tapping the Yang Gang for support.

A recent email blast from Yang's campaign that was reviewed by Business Insider invited donors in the San Francisco Bay Area to attend and contribute to one of three upcoming fundraisers.

"Now is a critical time for raising funds as we want to get on the airwaves in Iowa and New Hampshire and meet our end of the month goals," a volunteer for the campaign's finance office wrote.

A campaign spokesperson did not return a request for comment.

This isn't Altman's first foray into politics. After the surprise results of the 2016 election, Altman said he wanted to learn about how the rest of America thinks. He traveled across the country to talk to Trump supporters and shared his findings on his personal blog.