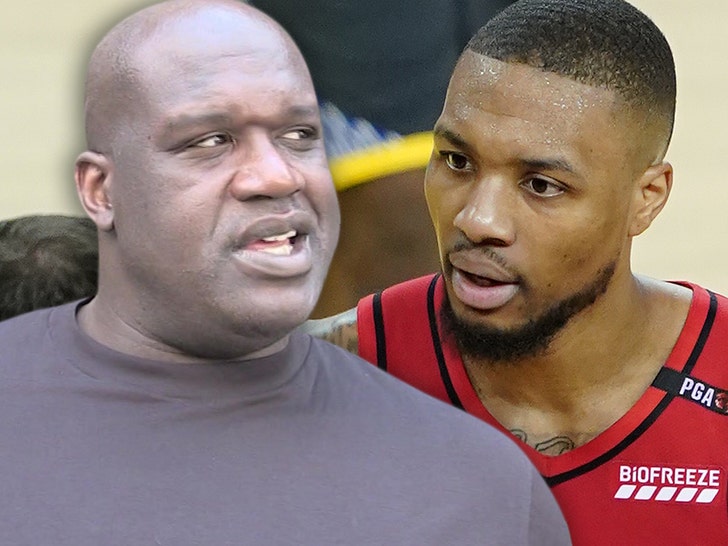 "You rap 'cause you need it dawg, I do it for sport. When you run I see that tampon string in your shorts."

Yep, that's Shaquille O'Neal hitting below the belt in his 2nd-round of a rap battle with Damian Lillard … where the Big Fella makes several comparisons between Dame and female genitalia.

In the new track, titled "Second Round Knockout Freestyle" … Shaq compares Dame to a "queef" and then says, "Why would I clout chase a dude with camel toe in the front?"

He also tells Dame to call him Dr. Diesel and says he plans to bring Lillard in for his annual pap smear.

There's more …. Shaq also goes after Dame as a basketball player — saying the dude sucks and has never won.

"I can tell in your flow that you're rattled. How you a battle rapper when in your real job you ain't win no battles?"

He continues … "And you shoot too much. Dudes on your team hate it. Keep talking, [I'll] make a phone call, get you traded."

There's a random shot at Chris Paul too — "I'm gonna do to you what Rondo did to Chris Paul."

Shaq's new track comes days after Lillard dropped his 2nd round — a track called "I Rest My Case," which was posted on Friday.

Waiting for your permission to load Soundcloud audio.

Dame's line included … "Sensitive, I almost confused you with Lisa Leslie. How you swing on Chuck [Charles Barkley] and then try to go be his bestie?"

He also says … "All your closest folks need to come with an intervention. The General commercial's a little over-extended."

You already know about the first round of back and forth … most people considered it a draw — including Dwyane Wade, who was mentioned in Dame' original Shaq diss track.

← THE RISE OF CLOUD GAMING: Cloud-based streaming is the next frontier in the video gaming ecosystem — here’s why cloud service providers and telecoms are vying to tap the multibillion-dollar opportunity