The federal deficit jumped 26% to $984 billion for fiscal 2019, its 3rd straight yearly gain under Trump

The federal deficit swelled to $984 billion in fiscal 2019 — a 26% jump from last year — despite the nation undergoing another period of sustained economic growth.

This year's deficit figure represents the highest amount since 2012, according to the Treasury Department, when the nation was still recovering from the 2008 financial crisis.

Deficits tend to fall when the economy is growing, given lower unemployment rates which helps bring in more tax dollars to government coffers and lower spending on public aid. And the mounting deficit is generating anxiety among budget experts who fear the government will have less room for emergency spending in a future economic slump.

"This is the first time in our history that we are seeing a boom in the economy at the same time deficits are rapidly rising. It's alarming," Marc Goldwein, a senior policy director of the Committee for a Responsible Budget, told the Washington Post.

President Donald Trump campaigned to wipe out the nation's federal debt within eight years, but has instead piled onto it with the 2017 GOP tax cut as well as ramped-up defense spending. Its a stark shift for Republicans, who tend to be thrifters with a Democrat in the White House but become big spenders when they're in power.

"Republicans talk a good game about deficit reduction when they're out of power," a conservative economist and senior Manhattan Institute fellow Brian Riedl previously told Business Insider. "But once they win the White House, they prioritize the more popular policies of cutting taxes and increasing defense spending."

As shown in the graph below, President Barack Obama also ran up large deficits, though to stave off the nation's economic collapse during the Great Recession. He cut deficits through his later years in office, but Trump has added onto it for three years. 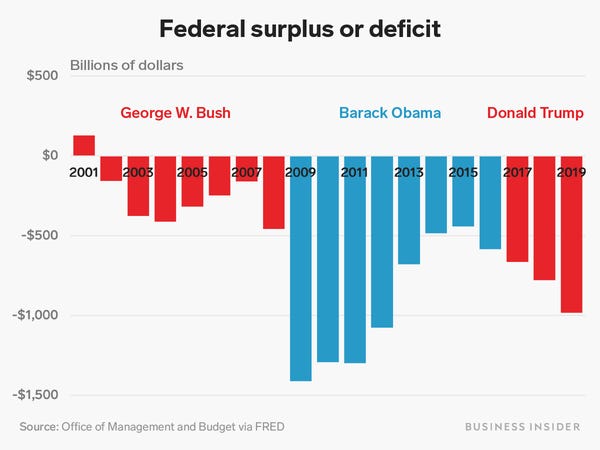 Treasury Department data for 2019 shows the government spent $4.4 trillion on its programs while drawing in $3.5 trillion in tax dollars and other revenue — leaving the $984 billion hole in its finances.

Experts say 2017 GOP tax law has been a driver of the ballooning deficit. The Congressional Budget Office projected the law would increase the annual deficit by about $200 billion over a decade, or to nearly $2 trillion.

The Trump administration's tax cut has helped slide tax revenues instead of paying for itself in the form of robust economic growth.

Adam Neumann was once reportedly too busy surfing in the Maldives to return to New York to go over WeWork's IPO paperwork, so he had an employee travel to him →