The Walking Dead Sneak Peek: Daryl Opens Up to Connie in an Unexpected Way The Walking Dead Sneak Peek: Daryl Opens Up to Connie in an Unexpected Way

Sure, The Walking Dead's Merle Dixon (Michael Rooker) turned out to be a pretty nasty villain, but he was still Daryl Dixon's (Norman Reedus) brother. In the exclusive sneak peek above, Daryl opens up to Connie (Lauren Ridloff) while they search for Kelly (Angel Theory) in the woods.

"Did I ever tell you about my brother, Merle?…This one time he takes me fishing on this big lake, which is private property, in this boat, which is stolen, a stolen boat, right," Daryl explains.

And of course, to make the situation worse, Merle was drinking, Daryl says, and Merle needs Daryl to save him after he goes overboard. Daryl swims him to shore, and you know what Merle said? "Dummy, go get the beer," Daryl says. "Idiot, right?" 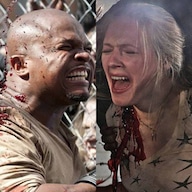 But what's really going to get the attention of The Walking Dead fans is the lingering handholding between the two after Daryl finishes his story and tells Connie they'll find Kelly. Is there a romance blossoming there?

"I don't know. I think he definitely has started viewing her as an equal. I mean, she can take care of herself. She's definitely smart… She can hold her own and I think Daryl learning sign language is a cool thing so he can communicate with her and they can be allies. It's really fun and she's helping me a lot on set learning sign, and I've made a couple of mistakes here and there, but she laughs it off. I think the bond between them is a genuine bond and there's a lot of respect there," Reedus told EW.

In episode five of season 10 fans should also expect drama with missing supplies from the Hilltop, Negan (Jeffrey Dean Morgan) being idolized by an Alexandrian and Ezekiel (Khary Payton) with a secret.

Read More About The Walking Dead Sneak Peek: Daryl Opens Up to Connie in an Unexpected Way at www.eonline.com

← Halsey Calls Evan Peters Her 'Boyfriend' After Getting Scared on 'Ellen'