Trump boasted that new market highs are a ‘big win’ for everyone. But half of Americans don’t own stock. President Donald Trump claimed Monday that new record highs in financial markets would broadly benefit Americans, even though most households own little to no stock.

"The S&P just hit an ALL TIME HIGH," the president wrote on Twitter. "This is a big win for jobs, 401-K's, and, frankly, EVERYONE! Our Country is doing great."

With investors focused on corporate earnings and and a busy economic calendar, the S&P 500 rose 0.5% to a new intraday high at the start of the week. The benchmark index stood at 3,038 around 1:30 p.m., above its last record level from July.

But most of those benefits were poised to go to the wealthy. Whether it be through retirement packages or shares in public companies, roughly half of Americans have not invested in stocks at all. In 2016, about 84% of stocks were owned by the top 10% of households.

Lawmakers on both sides of the aisle have drawn direct connections between the stock market to the economy. While the two constantly influence each other, they do not necessarily move in tandem.

"Many Americans grapple with what it exactly means for the broader economy as well as its impact on their household balance sheets," said Lowell Ricketts, the lead analyst for the Center for Household Financial Stability at the Federal Reserve Bank of St. Louis. "Stock market wealth is heavily concentrated."

Trump, whose populist economic promises helped propel him to the White House in 2016, has placed a particular emphasis on financial markets as president. He regularly comments on indexes and individual companies, attempting to tie their performance to his own in office.

Since the House launched an impeachment inquiry into Trump in late September, the president has warned against claimed economic implications and increasingly sought to shift focus toward declared accomplishments.

"If they actually did this the markets would crash," Trump said of impeachment last month. "Do you think it was luck that got us to the best Stock Market and Economy in our history. It wasn't!"

On Monday, Trump also touted progress in a trade dispute that has rattled financial markets and the economy.

"We are looking probably to be ahead of schedule signing a great big portion of the China deal," Trump told reporters at Joint Base Andrews as he prepared to depart for a trip to Chicago. "We call it phase one, but it's a great big portion." 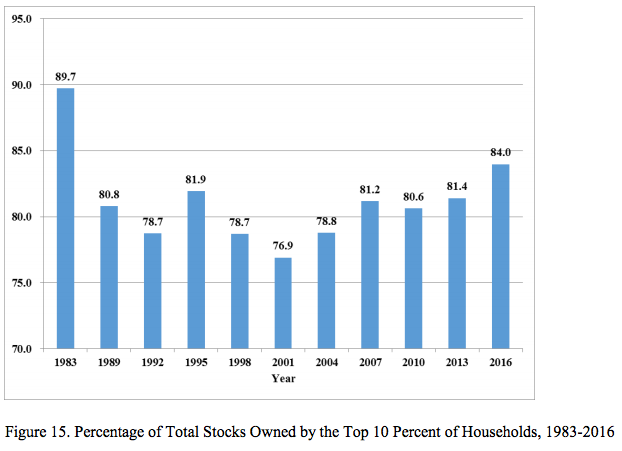 Read more: A $1.3 trillion asset manager says downtrodden value shares are masking some great businesses — and explains why an 'extraordinary bounce back' is coming

Read More About Trump boasted that new market highs are a ‘big win’ for everyone. But half of Americans don’t own stock. at markets.businessinsider.com

← Ready for a New Superman TV Show? The CW Sure Is