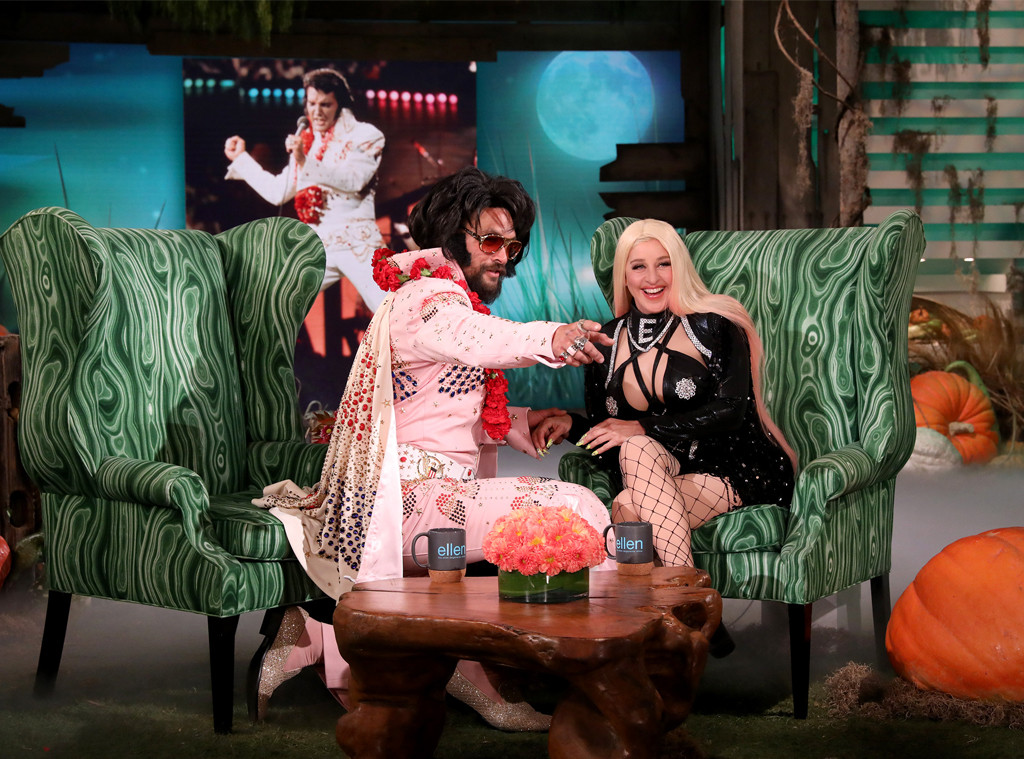 Jason Momoa is a hunk… of burning love.

The actor celebrated Halloween on The Ellen DeGeneres Show with an amazing Elvis Presley costume. Dressed in a replica of one of Elvis' famous jumpsuits, Jason rocked a pink getup that came complete with a cape, flared-out pants, flashy belt and tons of sequins. Fully committing to the look, the Aquaman star wore an Elvis-inspired pompadour wig and thick-rimmed aviator sunglasses. Jason added his own twist to the costume with a red lei garland, paying homage to his Hawaiian heritage.

Channeling the late music icon, Jason made sure to make a grand entrance onto the Ellen stage. He danced his way down the studio's staircase and through the rows of seats to Elvis' "See See Rider," which he famously performed in Honolulu back in 1973.

"I am obsessed with Elvis, slightly," Jason told host Ellen DeGeneres while delivering a spot-on impression of the King of Rock 'n' Roll. "I just love him. My momma raised me on him and I'm so obsessed, I bought a bike like him. I got an old '55 pink Cadillac." 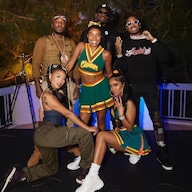 Much to Ellen's surprise, this wasn't the first time that Jason had dressed up as Elvis. He confessed that he went as the "Hound Dog" singer for Halloween during his Baywatch days.

"I was working with—there were a lot of beautiful women—and they invited me to a Halloween party in Los Angeles," Jason recalled. "It was my first time in Los Angeles and it was the Playboy mansion. And so, 19-year-old Jason showed up as a young Elvis, and this is my second time playing Elvis. Halloween's good to me."

Sitting down with Ellen, Jason also revealed that he got in trouble with his former Game of Thrones co-star Kit Harrington. As GOT fans will recall, Jason, Kit, and fellow Game of Thrones alum Emilia Clarke recently reunited to celebrate Emilia's 33rd birthday. The Mother of Dragons shared a picture of the three of them on social media, which Jason says Kit wasn't too thrilled about.

"Kit's shy and he doesn't like social media as much as I do," he explained. "Every time I see him, I get excited. I'm an excitable guy. So, me, him and Emilia get together and he's like, 'Ugh, let me guess, this is going to be all over the Internet?' And so, I said, 'I promise you, buddy, I won't post it.' So, it was my phone, of course I would send it to Emilia because we're tight—and I knew Emilia would post it. Kitty, I didn't post it, man!"

Benson's Brother Returns to Law and Order: SVU, Is Trouble Far Behind? →